At Lassen High School we guide and inspire our students to be motivated, engaged, passionate and prepared critical thinkers that have ownership of their future.

Seeking the highest level of achievement and self-confidence in each student, we will provide four years of college and career awareness and instruction in a respectful and inviting environment, providing an array of academic and personal supports, and a wide variety of extra-curricular programs to value and engage each student.

I n 1872, the first discussions were held to form a high school. It would take thirty years before it became a reality. For a while hope was on the horizon, when in 1875 Masillion Marstellar established the Susanville High School -a private institution. This school would continue to operate for six years when it finally closed its doors.

It was not until the spring of 1901 when E.W. Hayden, editor of the Lassen Advocate raised the issue for the need of a high school. Hayden proposed a district high school, rather than a county one. Hayden felt that all the school districts in the county would not support a high school.

In the fall of 1902, Hayden again revived the issue for a high school. This time he succeeded in generating more interest. In September, John B. Spalding and Franklin M. Ward circulated petitions to have the matter placed on the ballot for the November election. On October 2, 1902, those petitions were placed before the Lassen County Board of Supervisors and they approved the ballot measure.

Proponents were worried that the voter’s might confuse the issue as a bond measure. Yet, funding for a high school still had to be addressed. It was proposed that the property tax rate be increased by one cent per $100 assessed value. This tax would generate $3,700 a year-more than sufficient to operate a high school. 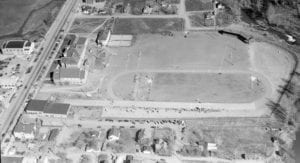 As the ballot proposition called for the creation of a county high school, t

here was Hayden’s concern that it might not pass, especially with the voters far removed from Susanville. Surprisingly many of the outlying districts were supportive of the measure. After all, the nearest high school available for most was in Reno, Nevada.

On November 4, 1902, the voters of Lassen County went to the polls. The voters approved the creation of the Lassen County High School by a large majority with 637 votes in favor versus 295 opposed. Of course, it came as no surprise that Bieber strongly opposed it, with a vote of 110 against and 38 in favor. Though, Hayden Hill neighboring the Bieber precinct voted 17 in favor and 2 against.

On September 14, 1903, the first session of the Lassen County High School began with approximately forty students. The faculty consisted of two instructors, F.C. Schofield (who also served as principal) and George H. Barton. Classes were held at the Susanville Grammar School, the site of the current Credence High School.

In April 1904, the Rays of the Purple made its debut and thus the school’s annual publication was inaugurated. In the early years it was published twice year. 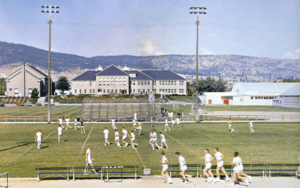 At this same time, some progressive citizens deemed that it was important for the need of a separate place for a high school. There were two obstacles to overcome. The first, of course, was how to finance it. A legal entanglement occurred as to whether a bond issue could be placed. A solution was found and the Lassen County Board of Supervisors agreed to a special levy property tax. The next hurdle to overcome was the selection of a site. Three properties were reviewed. It was agreed to purchase the Blake property on Main Street for $2,000. This is still the present high school grounds, though additional property has since been acquired.

W.H. Weeks, an architect from Watsonville, California was commissioned to draw up the plans. Weeks presented the school’s trustees three different proposals, and the trustees accepted plan number three. On July 13, 1905, the Granite Rock Company was awarded the contract to build the school at a cost of $25,670. On September 23, 19 05 , witnessed the laying of the cornerstone. The new high school would not be ready for occupancy until October 1906.

A lot has transpired since that first graduating class. The following are some highlights over the years.